What this is about
in 90 seconds: 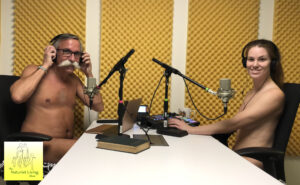 Since 2008, The Naturist Living Show has been presenting topics related to naturism and discussing issues of interest to naturists. (nudism/nudist in some countries) While we obviously cover issues related to nudity, naturism is about much more than being naked so we cover topics related to self-esteem, body-image, body-acceptance, and living in a more natural way. The podcast is produced by Bare Oaks Family Naturist Park in Ontario, Canada.

WHAT ARE PODCASTS? →
HOW TO LISTEN? →

The Naturist Living Show theme music is "The Day We Met" by Mark Hodges.

This podcast is written, recorded, produced and hosted in Ontario, Canada. The blog and podcast are only offered in those jurisdictions where they may be legally offered. You agree that your use of this blog and podcast shall be governed by and construed in accordance with the laws of the province of Ontario in Canada. 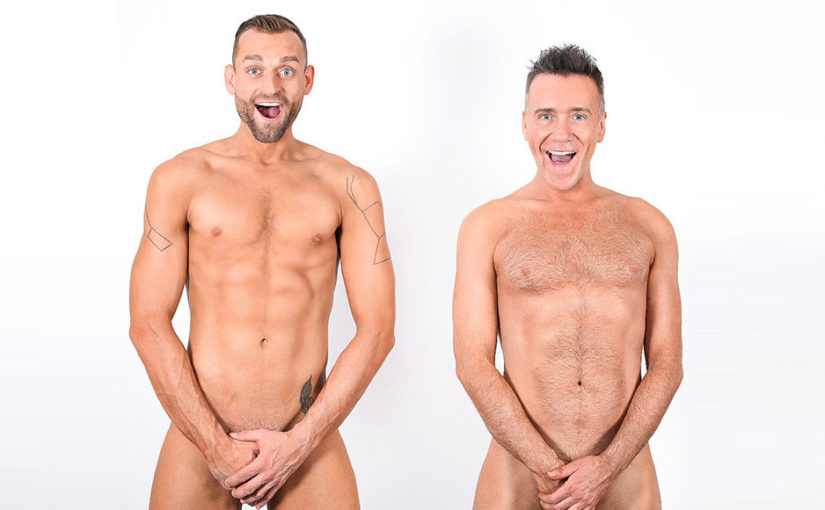 Tim Chizmar and Kayla Rae attends the Puppetry of the Penis show, a.k.a. the “art of genital origami”, in Las Vegas and interview the performers: Jamie Morris and Robert Ryan. 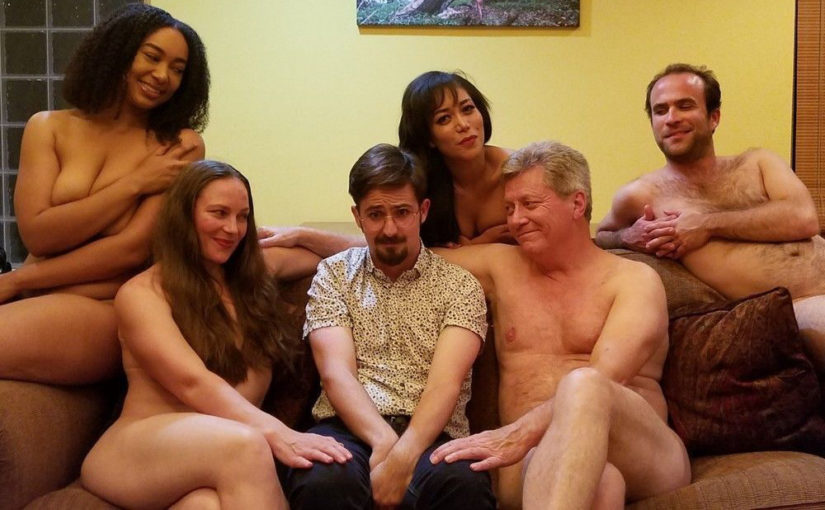 Tim Chizmar interviews the director and cast of “Disrobed: Why So Clothes-Minded?” performed at the 2019 Hollywood Fringe Festival. 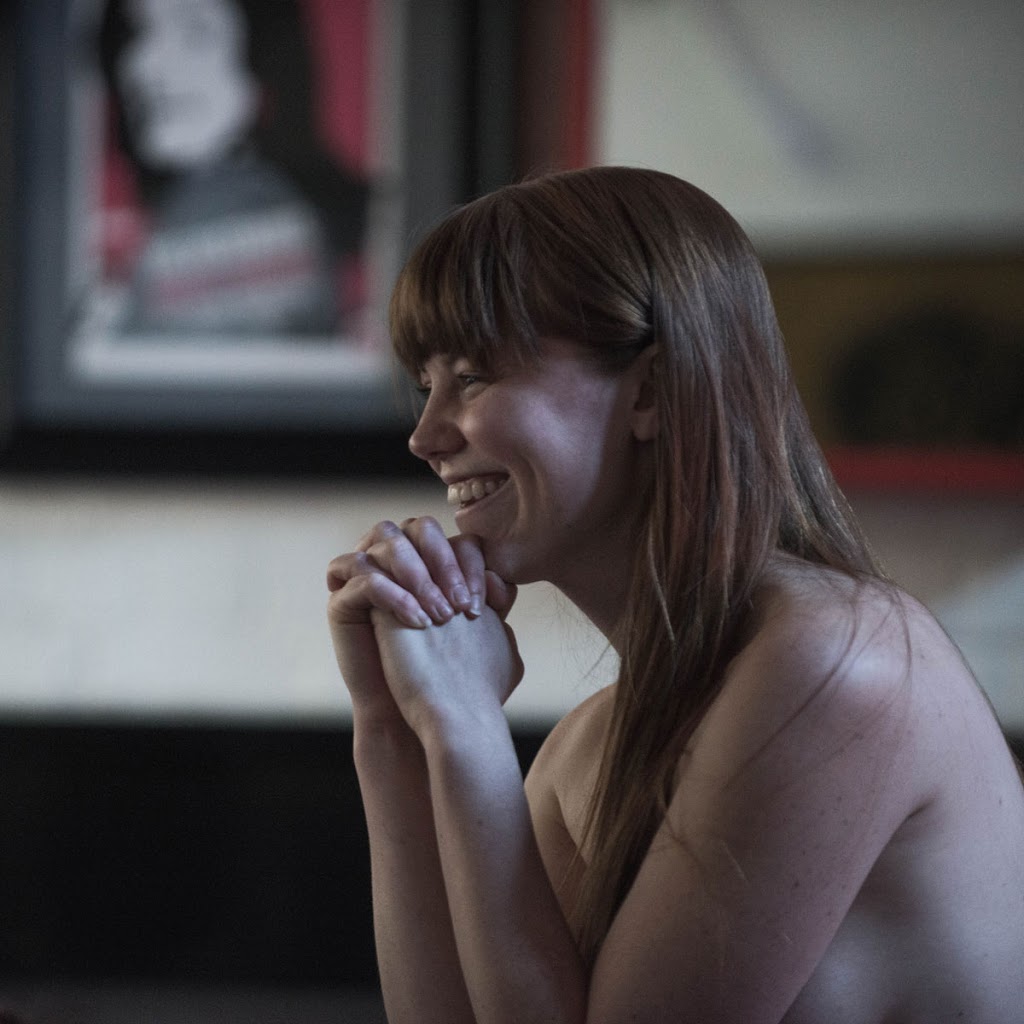 Thea Fitz-James discusses her one-woman play Naked Ladies along with body issues, feminism, and the meaning of nudity.

Photo: Thea Fitz-James during a performance of Naked Ladies 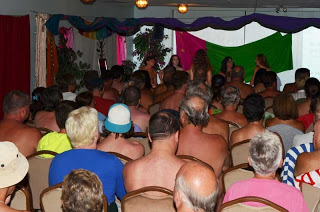 A radio play version of The Vagina Monologues performed during the 2013 FCN/FQN Canadian Naturist Festival at Bare Oaks Family Naturist Park. Plus Felicity talks about a recent NBC News story about attracting youth and whether teens should tell others that they are naturists. 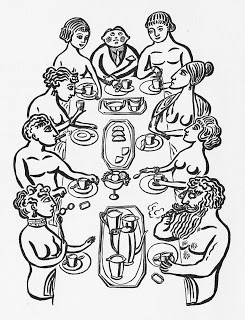 A radio-play adaptation of Barely Proper by Tom Cushing recorded at Bare Oaks Family Naturist Park on August 4, 2011 during the Naturist Festival. Originally published in 1931 and subtitled “an unplayable play”, Barely Proper was extensively performed in nudist/naturist clubs in the 1960’s and 1970’s and served as an introduction and fundraiser for them.

Illustration by Mordecai Gorelik from the original 1931 edition of Barely Proper by Tom Cushing.
The One-Act Adaptation of Barely Proper is by Leonard Lehrman ©1991
The music at the beginning of the play is Choro “Aguenta, seu Fulgêncio”, composed by Lourenço Lamartine and played by Pixinguinha (flute) and Lourenço Lamartine. Recorded in 1929 (RCA Victor Talking Machine Company of Brazil) 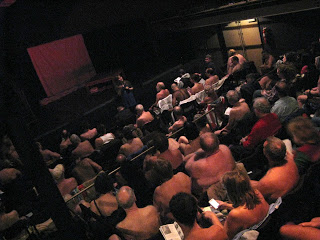 A discussion of nudity in theatre including a play where a clothing-optional night was held in March 2011. Plus an interview with the actors of this two-woman show where they spend most of their time nude on stage.

This podcast is written, recorded, produced and hosted in Ontario, Canada. The blog and podcast are only offered in those jurisdictions where they may be legally offered. You agree that your use of this blog and podcast shall be governed by and construed in accordance with the laws of the province of Ontario in Canada.

This website uses cookies to improve your experience while you navigate through the website. Out of these, the cookies that are categorized as necessary are stored on your browser as they are essential for the working of basic functionalities of the website. We also use third-party cookies that help us analyze and understand how you use this website. These cookies will be stored in your browser only with your consent. You also have the option to opt-out of these cookies. But opting out of some of these cookies may affect your browsing experience.
Necessary Always Enabled

Any cookies that may not be particularly necessary for the website to function and is used specifically to collect user personal data via analytics, ads, other embedded contents are termed as non-necessary cookies. It is mandatory to procure user consent prior to running these cookies on your website.